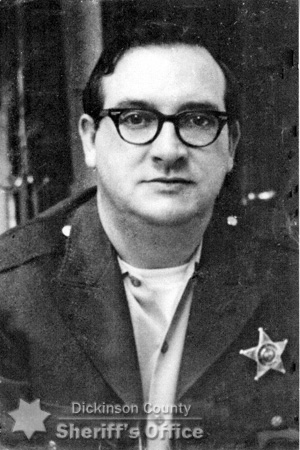 Chief Deputy Sheriff George Williamson was killed in an automobile accident while responding to Superior after receiving reports of a 4-year-old boy who had been struck by a car.

He and another deputy were driving on a gravel road (now known as 330th Avenue), with lights and siren activated, when they collided with another car at an intersection with a paved road (County Road A22/170th Street). Chief Deputy Williamson and the driver of the other vehicle were both killed in the collision. The other deputy suffered serious injuries.

Chief Deputy Williamson was a veteran of the Korean War. He had served with the Dickinson County Sheriff's Office for five years and had previously served with the Spencer Police Department for two years. He was survived by his wife, daughter, two sons, mother, and two sisters.

The following articles appeared in the June 14, 1973 edition of the Spirit Lake Beacon

Dickinson County's first deputy sheriff and a Spencer man were killed in a car-pickup crash Friday evening at the intersection of a gravel road and county blacktop about two miles south of Superior.

A third man, Deputy Sheriff Michael Harleman who was riding with Deputy Williamson, was injured and is in Holy Family Hospital at Estherville where his condition is listed as 'serious'.

Authorities said a Dickinson County Sheriff's car driven by Williamson, 39, was. answering a call on a personal injury accident at Superior when the car he was driving collided with the pickup driven by Sierck, 46.

Williamson, of Arnolds Park, is originally from Spencer and was on the Police Department before he joined the Dickinson County Sheriff's department five years ago. He has been first deputy since last August.

Sierck, 46, was employed as a clerk at the Spencer post office.

Authorities said the sheriff's car was traveling north on the gravel toward Superior with lights and siren going, and the Sierck vehicle was traveling west on the blacktop.

Highway Patrol Troopers Roy Vogel and Richard Fellin, who covered the accident, said there had been a call at 7:15 p.m. for assistance at a pedestrian mishap in Superior.

Sheriff Baker said his deputies were in the Terril area and proceeded north to Superior.

The troopers said the Superior accident involved a four-year-old youngster, Kent Billings, who ran out in front of a car driven by Derwood Kern of Estherville. The boy was taken to Dickinson County Memorial Hospital, treated for abrasions of the back and shoulder, and released.

The fatal accident is believed to have occurred a few minutes after 7:15 p.m.

Funeral services for Deputy Williamson were held Monday afternoon at the Okoboji Lakes Tabernacle in Arnolds Park with the Rev. Ivan Maxson of Royal officiating.

Interment was in Okoboji Cemetery at Arnolds Park with the Donovan-Leyson Funeral Home of Spirit Lake in charge of arrangements.

Services for Mr. Sierck were also held Monday in Spencer.

"It's hard to express the gratitude I feel for the way people helped during the emergency," said Dickinson County Sheriff Robert Baker Tuesday.

The sheriff was referring to the accident Friday that took the life of his first deputy, George Williamson and hospitalized Deputy Mike Harleman.

"Spirit Lake's police department took all calls for our office from Friday evening until 10 a.m. Tuesday, and the officers assisted in investigations," the sheriff stated.

"Deputies from Osceola, Emmet and Clay Counties filled in at night in those townships close to their borders - - thanks to Sheriffs Bob Rolfes, Richard Dahl and Boyd Bushey. And for the first time in many years, Highway Patrol Troopers in the area were answering 'domestic calls'." He was referring to Troopers Marlyn Mossman of Spirit Lake, Bob Cherry of Milford and Marv Loebach of Estherville.

"Everyone has been just great! We even had 41 people volunteer to help clean up the tabernacle (where Williamson's funeral was held Monday), and it took only 2½ hours."

Sheriff Baker plans to bring his staff back to full strength as soon as possible. Harleman is not expected to be ready for duty for some time, and a deputy will be appointed temporarily to fill his post.