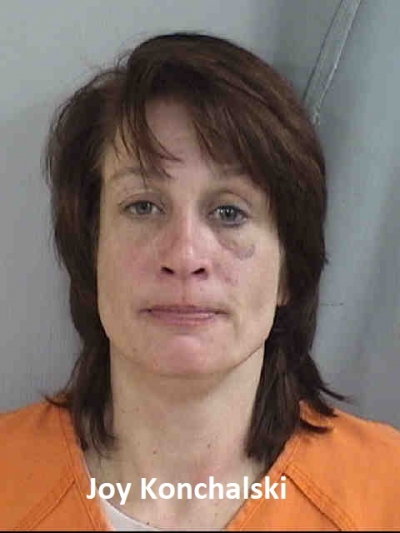 On February 7th, 2020 at around 6:55pm, the DCSO received a call in reference to a vehicle, on Highway 71 in the 3100 block, going northbound in the southbound lane at a high rate of speed.  The reporting party advised that the vehicle crossed over into the northbound lane and turned its lights off.  The vehicle then turned east on 250th Street.  It was then reported that the vehicle wrecked in the 2300 block of 250th Street.  The reporting party advised that one person exited the vehicle and went towards a tree line.

When deputies arrived on scene, they spoke to the reporting party.  The DCSO’s K9 Sasha was deployed to track the individual who left the vehicle.  K9 Sasha led the deputies to a nearby acreage.  When the deputies approached the residence, they could hear glass breaking.  A female, later identified as Joy Konchalski (41) of Des Moines, was breaking a window.  It was determined that Konchalski was not supposed to be at the residence.

A DRE (Drug Recognition Expert) conducted multiple tests at the jail.  Konchalski was charged with OWI 1st Offense, driving too fast for road conditions, failure to maintain control, reckless driving, possession of drug paraphernalia, trespassing, burglary in the 3rd degree, and criminal mischief in the 4th degree.  Konchalski is currently being held on a $7,000 bond/surety.

The DCSO was assisted by the Clay County Sheriff’s Office and the Milford Police Department.

All persons are presumed innocent until proven guilty in a court of law.

Last modified on Wednesday, February 26, 2020
back to top